Scranton Times Tribune: Op-Ed: Close the Gap Before it Opens 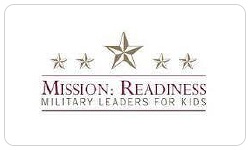 Scranton Times Tribune: Op-Ed: Close the Gap Before it Opens

By Gen. Daniel J. O’Neill and Gen. Michael A. Dunn

As we all know, 2014 is a major election year in Pennsylvania. On the ballot will be races for the entire state House of Representatives, half of the state Senate seats and our governor’s office. As voters, we have a responsibility to help guide the election debate to those issues that we see as critical to our commonwealth’s and our country’s future.

As retired general of the United States Army, we believe our candidates for public office must focus on better preparing our youth to be citizen-ready – healthy, educated, law-abiding contributors who are able to serve their nation in uniform or in the civilian sector.

We find it deeply troubling that the U.S. Department of Defense estimates that 75 percent of young Americans – ages 17-24 – currently do not qualify for military services. Poor academic performance, a lack of physical fitness, and a history of criminal behavior are among the top cited reasons for disqualification.

Even among those who do graduate high school and want to join the military, 22 percent do not possess sufficient math, literacy and problem-solving skills to pass the military’s entrance exam.

These statistics show a looming skills gap among the next generation of Americans that will limit their ability to fill 21st century jobs, which will place the economic and military elements of our national security at risk.

This situation is echoed by yet another recent U.S. Army report, “Strong Students, Strong Futures, Strong Nation,” that cautioned:

“In the coming decade, the United States will face a significant workforce shortfall and both the civilian and military sectors may not have the skilled labor required to meet the demands of a knowledge-based economy.

“The effect on our ability to compete globally will be devastating if we do not act immediately and forcefully to reverse the impact.”

As members of the national security non-profit organization Mission: Readiness, we believe one of the most effective ways to close this skills gap is to prevent it from ever occurring in the first place by expanding investment in high-quality pre-kindergarten programs.

New data from our neighboring state of New Jersey confirms that state systems of early education can be brought to scale with strong and lasting results in math and literacy.

Studies of voluntary high-quality programs in states such as Michigan, Arkansas, West Virginia, New Mexico and Pennsylvania also have shown impressive gains in literacy and reductions in the number of children needing special education services or being held back in school.

These new and emerging research results are bolstered by long-term studies of participants from high-quality programs in Michigan and Illinois, which found that participants were up to 44 percent more likely to graduate from high school.

Despite this successful track record, access to high quality pre-k is limited.

Only one of six of Pennsylvania’s preschool-age kids currently benefit from existing publicly funded preschool programs.

This is why Mission: Readiness is supporting the Pre-K for PA Campaign – an issue education campaign supported by individuals and organizations across Pennsylvania who believe that affording all children the opportunity to enter school ready to succeed is the right choice and an urgent necessity.

Candidates for our public offices must realize today’s three- and four-year-olds will be of age to join the military and workforce in 2028.

Expanding access to high-quality pre-k will have a profound impact on our children’s ability to achieve their dreams and become the contributing citizens that we need them to be to ensure our future economic and national security.

Pennsylvania’s next governor and members of our General Assembly must ensure that all kids have the opportunity to “Be All That They Can Be.”