Voters: Pre-k should be a priority for PA 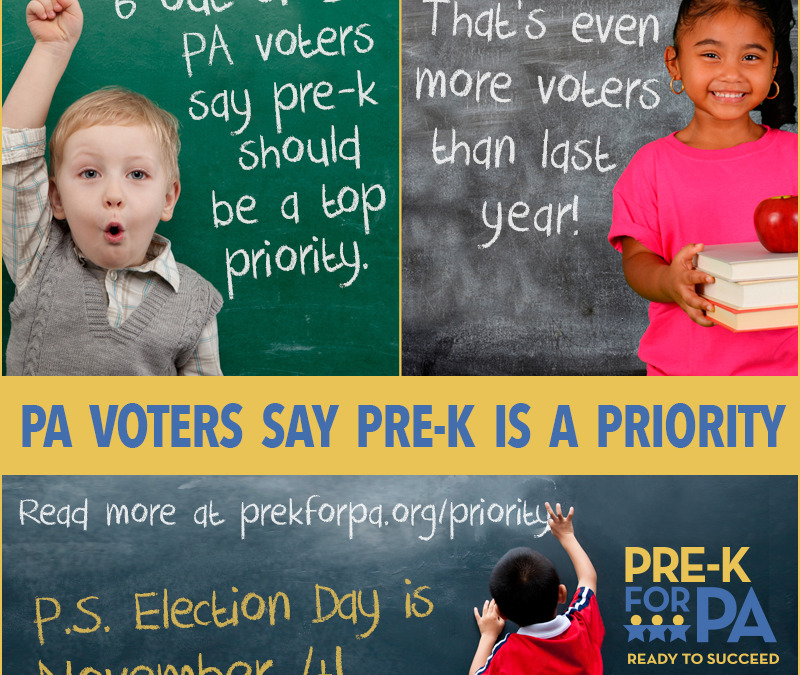 With Election Day fast approaching, two recent statewide polls of likely Pennsylvania voters demonstrate consistent and strong support for high-quality pre-kindergarten programming and voter prioritization for pre-k has grown. The polls are consistent with a previously released survey that also shows increased voter support for pre-k in the span of just one year.

The two new polls, conducted separately by Pennsylvania-based polling firms Terry Madonna Opinion Research* and Susquehanna Polling & Research (SP&R), show that growing majorities favor access to high-quality pre-k for every 3- and 4-year old child in the Commonwealth. According to the polling:

“With just 15 days until Election Day, these latest poll results further cement the sentiment among Pennsylvania voters that pre-k is a top priority when they head to the voting booth in November,” said Steve Wray, executive director of the Economy League of Greater Philadelphia, a Pre-K for PA coalition member. “Each new poll conducted on the topic shows a strong majority of voters wanting the next Pennsylvania governor to improve access to pre-k.”

Consistent with other recent poll results, voters continue to prioritize pre-k as a top concern. An August 2014 Lake/Bellwether survey found that 58% of likely voters consider pre-k a top priority, an increase from 50% in December 2013. The two Lake/Bellwether polls were commissioned by Pre-K for PA and used the same methodology.


A summary of the poll findings can be viewed on Pre-K for PA’s website at www.prekforpa.org/priority.

Pre-K for PA is an issue campaign supported by thousands of individuals and organizations across Pennsylvania who believe that investing in our children is the right choice and an urgent necessity. Our vision is that every 3- and 4-year-old in Pennsylvania will have access to high-quality pre-k. While the campaign neither endorses nor opposes candidates, it advocates on behalf of this vision for Pennsylvania’s children, schools and communities.