Pre-K Should be a Top Budget Priority 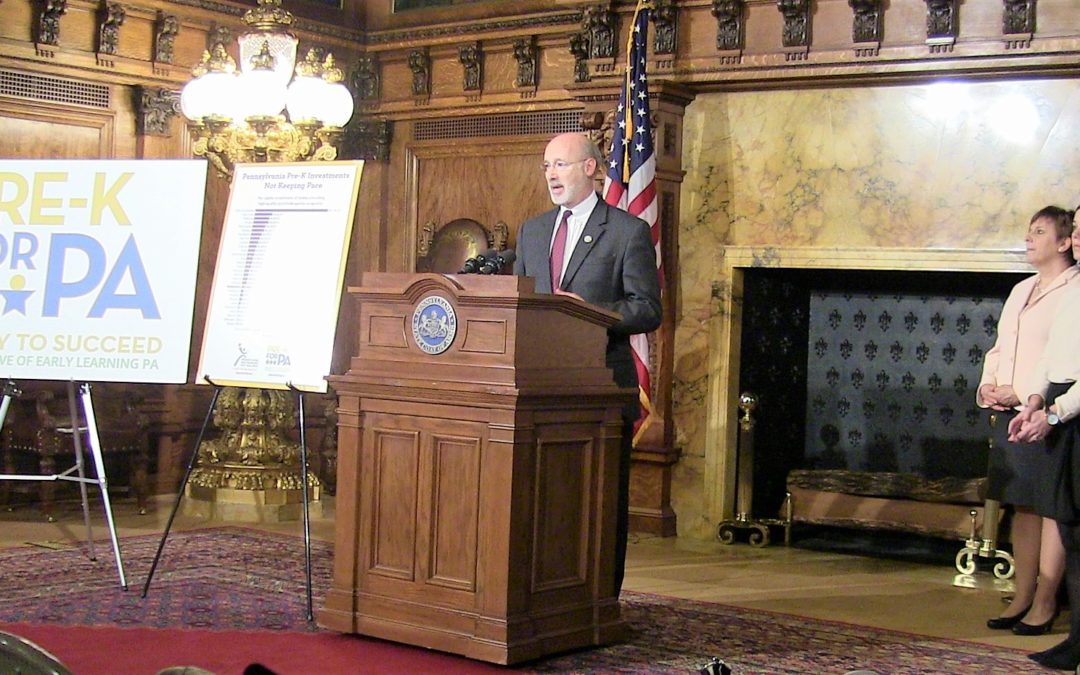 Pre-K Should be a Top Budget Priority

Harrisburg, PA (May 8, 2017)—Pennsylvania Partnerships for Children (PPC) released a report today in its role as a principal partner of the Pre-K for PA Campaign that commends Pennsylvania for making increased state investments in publicly funded, high-quality pre-k but highlighting that the commonwealth is lagging behind many other states, including economic competitors, in its per capita investment. PPC President and CEO Joan L. Benso was joined at a state capitol press conference by Governor Tom Wolf, Cumberland County District Attorney David Freed, York County business leader Michael Smeltzer and other partners in the campaign.

The report, “Prioritizing Pre-K in Pennsylvania: A State Comparison,” indicates that Pennsylvania joins 27 other states and the District of Columbia having made the wise choice to invest in high-quality pre-k, but only ranks 20th among the cohort in per capita investments. This places Pennsylvania behind many of our economic competitors and neighboring states including Maryland, New Jersey, New York and West Virginia.

“Countless research studies have proven time after time that pre-kindergarten works. The question is no longer does high-quality pre-k work, but how much is the commonwealth investing in high-quality pre-k to build a solid foundation for academic success,” said Joan Benso, President and CEO of PPC.

“Sixty-four percent of eligible preschool children in our state still cannot access this critical intervention as we have failed to invest enough resources,” she said.

Benso and her campaign partners call on the legislature to join the governor and expand pre-k investments in the state budget by $75 million for the coming fiscal year.

Children who attend high-quality pre-k are also less likely to be involved in crime later in life. Cumberland County District Attorney David J. Freed said, “I know from years of experience that we cannot simply arrest, prosecute and incarcerate our way out of our crime problems. We have to implement effective approaches that keep people from turning to crime in the first place. High-quality pre-k is a key focal point of that strategy.”

Business leaders have prioritized pre-k funding as a valuable public investment that helps create a productive workforce as it returns $4 in savings and benefits for every dollar invested.

“I know firsthand that if we fail to provide state support for early learning, we’re missing a critical opportunity to invest in the future of our economy,” said Michael Smeltzer, Early Learning Investment Commission (ELIC) member and President of Advancement Solutions LLC. “Children who attend high-quality pre-k enter school better prepared and while the research tells us that they enjoy higher academic achievement, we also know that they learn the soft skills necessary to become valuable future employees.”

Benso also presented an award to the governor from Pre-K for PA commending him for his leadership. The governor is joined by more than 50 bi-partisan legislators who are also being honored this spring.

“Prioritizing Pre-K in Pennsylvania: A State Comparison,” can be found at www.papartnerships.org/prekinpa or www.prekforpa.org.