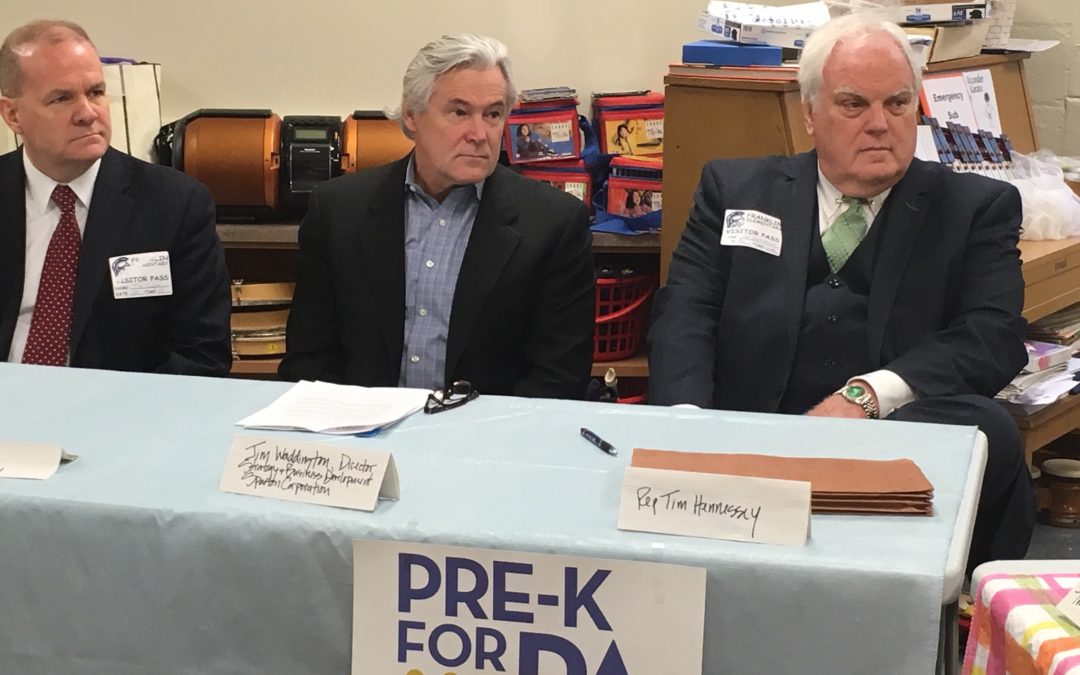 Pottstown, PA – Pennsylvania House members Tom Quigley and Tim Hennessey, joined Pottstown area leaders for a mid-year pre-k visit at Franklin Elementary. Officials took the opportunity to visit with pre-k students in a new state-funded Pre-K Counts classroom that was made possible by additional investments included in the 2017-18 state budget.

“Greater access to high-quality pre-k is an essential investment in our community,” said Tim Phelps of the PA Early Learning Investment Commission. Phelps continued, “Pre-k programs are backed by decades of research showing that children who attend have a more positive trajectory in life. This means more kids finishing high school, getting a job, less reliance on social services and less crime in our community.”

The expansion classroom at Franklin Elementary was made possible by the infusion of an additional $25 million in funding for Pennsylvania Pre-K Counts and $5 million for the Head Start Supplemental Assistance Program as part of the state’s 2017-2018 budget. Montgomery County early learning providers received new funding for 159 expansion seats. Pre-K Counts and the Head Start State Supplemental are the primary state funding sources for high-quality pre-k in Pennsylvania.

Pottstown School District Superintendent Stephen Rodriguez noted that the added capacity to high-quality pre-k is welcome news as only 28 percent of income eligible 3- and 4-year-olds in Montgomery County have access to publicly funded high-quality pre-k according to new data from the Pre-K for PA Campaign.

“While I join you to celebrate this new classroom, I must be clear that we still have a lot of work to do,” said Rodriguez. “More than 4,700 income eligible three- and four-year-olds in Montgomery County still lack access to this once-in-a-lifetime learning opportunity.”

More than 106,000 eligible children, or 61 percent of all three- and four-year-olds, across the commonwealth lack access to publicly funded, high-quality pre-k each year.

Jim Waddington of Sparton Corporation noted that Pennsylvania is experiencing a shortage of qualified workers and pre-k is the place to start to stem that tide.

“A recent survey from the statewide chamber of business and industry showed that more than half of the 400+ Pennsylvania employers that were surveyed reported trouble finding people with adequate skills, training, or education. This was especially true of technical and skilled job openings,” said Waddington. “It is particularly troubling considering the proven benefits of pre-k and lack of access to pre-k statewide.”

A large body of research shows children who benefit from high-quality pre-k: