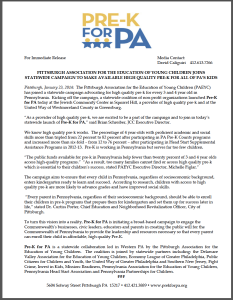 Pittsburgh, January 23, 2014: The Pittsburgh Association for the Education of Young Children (PAEYC) has joined a statewide campaign advocating for high quality pre-k for every 3 and 4 year old in Pennsylvania. Kicking off the campaign, a statewide coalition of non-profit organizations launched Pre-K for PA today at the Jewish Community Center in Squirrel Hill, a provider of high quality pre-k and at the United Way of Westmoreland County in Greensburg.

“As a provider of high quality pre-k, we are excited to be a part of the campaign and to join in today’s statewide launch of Pre-K for PA,” said Brian Schreiber, JCC Executive Director.

We know high quality pre-k works. The percentage of 4 year-olds with proficient academic and social skills more than tripled from 22 percent to 82 percent after participating in PA Pre-K Counts programs and increased more than six-fold – from 12 to 76 percent – after participating in Head Start Supplemental Assistance Programs in 2012-13. Pre-K is working in Pennsylvania but serves far too few children.

“The public funds available for pre-k in Pennsylvania help fewer than twenty percent of 3 and 4 year olds access high-quality programs.” “As a result, too many families cannot find or access high quality pre-k which is essential to their children’s success, stated PAEYC Executive Director, Michelle Figlar.”

The campaign aims to ensure that every child in Pennsylvania, regardless of socioeconomic background, enters kindergarten ready to learn and succeed. According to research, children with access to high quality pre-k are more likely to advance grades and have improved social skills.

“Every parent in Pennsylvania, regardless of their socioeconomic background, should be able to enroll their children in pre-k programs that prepare them for kindergarten and set them up for success later in life,” stated Dr. Curtiss Porter, Chief Education and Neighborhood Revitalization Officer, City of Pittsburgh.

To turn this vision into a reality, Pre-K for PA is initiating a broad-based campaign to engage the Commonwealth’s businesses, civic leaders, educators and parents in creating the public will for the Commonwealth of Pennsylvania to provide the leadership and resources necessary so that every parent can enroll their child in affordable, high quality Pre-K.