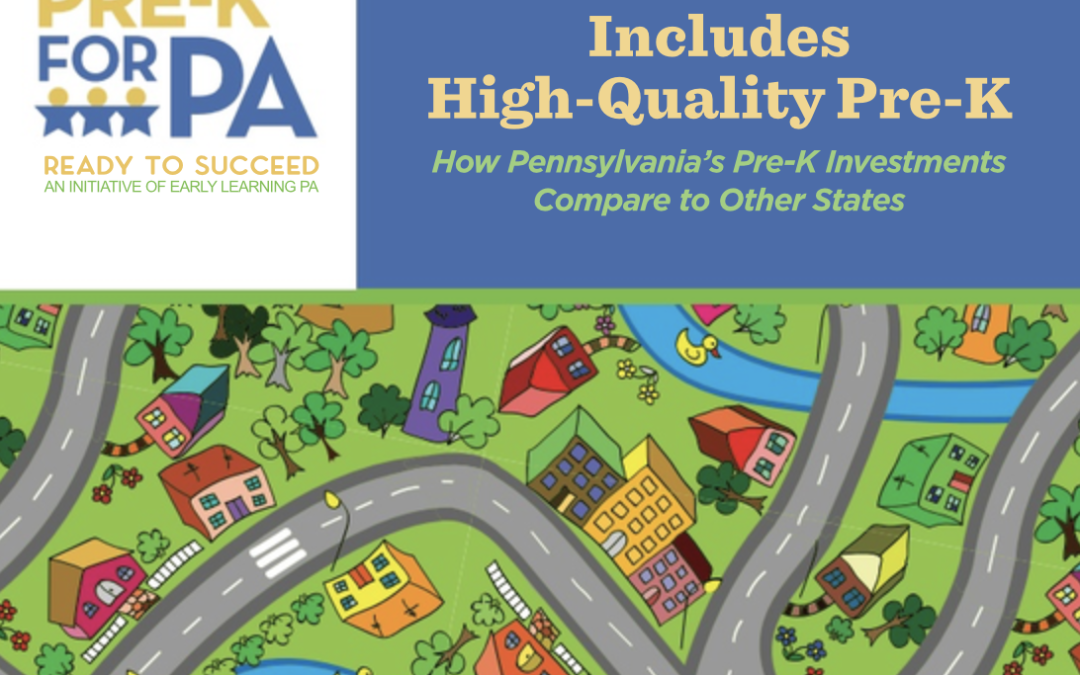 Pennsylvania Partnerships for Children (PPC), in its role as a principal partner of the Pre-K for PA Campaign, today released the Campaign’s third report comparing Pennsylvania’s per-capita investments in pre-k. The report shows states with similar political compositions and quality standards are making stronger per capita investments, putting their early learners on the road to success in school and in life at a faster pace than Pennsylvania.

According to The Road to Success Includes High-Quality Pre-K, Pennsylvania ranks 19th out of the 28 states that also publicly fund high-quality pre-kindergarten programs with similar quality standards, remaining nearly stagnant since the first state comparison report was released in 2017.

“Giving all eligible preschoolers a chance to attend high-quality pre-k should be a top priority for all of our state policymakers, regardless of political party affiliation,” said PPC President and CEO Kari King. “If we want to pave the way to success in adulthood for our early learners, we need to increase our investments in high-quality, publicly funded pre-k, because 56 percent of eligible children do not have access to this vital education.

When the Pre-K for PA Campaign released its first report comparing per capita pre-k investments in 2017, Pennsylvania ranked 20th out of 28 states and the District of Columbia that were analyzed. Another state-by-state comparison was done the following year in 2018, ranking Pennsylvania at 18th out of 30 states when looking at per capita investments in high-quality pre-k.

King noted the body of academic research supporting the benefits of high-quality pre-k goes back decades, revealing improved outcomes for enrolled children that are difficult to dispute: the programs prepare students for kindergarten and beyond by supporting the development of the whole child, provide an early chance at proactively impacting the development of Pennsylvania’s future workforce, and are particularly beneficial for low-income children, who are more likely to have road blocks along the way than their peers.

Michigan – where the political landscape is like Pennsylvania – has invested at a higher per capita rate than the Commonwealth and ranks 4th. Its General Assembly is controlled by Republicans and the governor is a Democrat.

During a media webinar PPC hosted as part of the report’s release, King was joined by: former Michigan Senate and House Majority Leader Ken Sikkema, a Republican who served in the state legislature for 20 years and was a champion for pre-k during his tenure; and Republican State Rep. Corley Ellis of Alabama, who advocates for pre-k funding as a member of the House Republican Caucus Agenda Committee and oversees education spending on the House Ways and Means Committee.

“I was not convinced we could move the needle for pre-k funding in Michigan until I read a study showing the longitudinal benefits. At the time, both the executive and legislative branches in Michigan were very conservative, but no one could argue that high-quality pre-k delivers results. That was in the 1990s and early 2000s, and Michigan has been a leader for its pre-k investments ever since,” said Sikkema.

“Alabama has a long history of Republican-led legislative and executive branches and we’re viewed as a pre-k model nationally. I’m proud that we’re ranked 5thin this report because it shows that it doesn’t matter if you are a Republican or a Democrat in state office, prioritizing high-quality pre-k is just good policy.”

In Pennsylvania, an increase of $243 million in high-quality pre-k (Pre-K Counts and the Head Start Supplemental Assistance Program) by the 2022-23 fiscal year will put the state on par with others that deliver similar high-quality programs.

The Road to Success Includes High-Quality Pre-K can be found here.