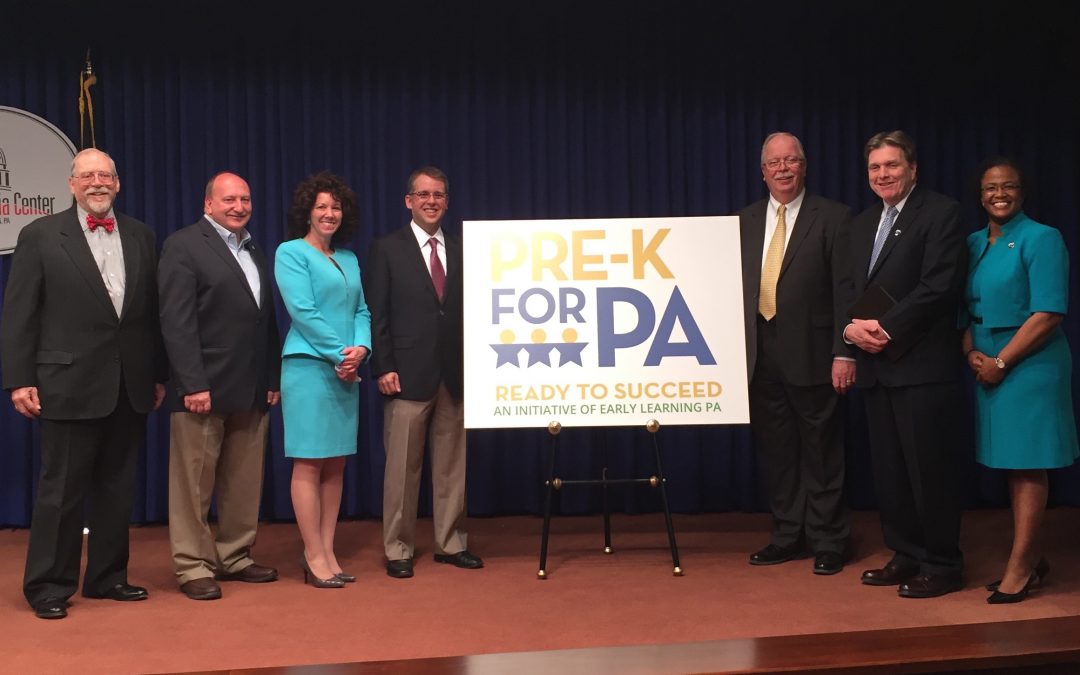 HARRISBURG (April 11, 2016)— As Mayors from Pennsylvania’s largest population centers continue to advocate for major pre-k initiatives in Philadelphia and Pittsburgh, Mayors and other leaders from mid-sized cities and communities across Pennsylvania gathered in Harrisburg today to encourage Governor Wolf and legislators to continue investing in publicly funded pre-k. The Mayor’s said pre-k is a vital element in the development of municipalities, citing lower crime, improved education outcomes, and greater workforce readiness as the key reasons to invest.

Lancaster Mayor J. Richard Gray, President of the Pennsylvania Municipal League joined forces with leaders from Cranberry to Lebanon in a chorus of support for expanded access to pre-k, “I support expanded access to pre-k as a cost-effective strategy to make our communities safer, and grow new jobs and businesses. A growing body of research shows that early childhood education in a pre-kindergarten setting provides a proven pathway towards achieving these goals.”

Governor Wolf’s 2016-17 proposed budget includes another $60 million in new funding for high quality pre-k. That investment would build on this year’s expansion and allow more than 14,000 young children to access pre-k over the two-year time period.

Research shows that expanded access to high quality pre-k can also reduce crime rates and make communities safer. Hundreds of Pennsylvania police chiefs, sheriffs and district attorneys have lined up behind efforts to invest in pre-k.

“Less crime means less money spent fighting crime,” said Pennsylvania Municipal League 1st Vice President and City of York Mayor C. Kim Bracey. “Imagine what we could do to improve our city or lower our taxes if we didn’t have to devote so much of our local budget to dealing with crime on the back-end.”

Bracey cited the Chicago Child-Parent Center (CPC) preschool study, one of the nation’s most extensive studies that tracked child outcomes over 28 years, that found that children without access to a good pre-k program were 70 percent more likely to be arrested by the time they were 18 compared to children who had the benefits of pre-k.

In Pennsylvania, Department of Correction Secretary John Wetzel has touted research that shows a $120 million state funding increase for early childhood education will eventually lead to $350 million in Corrections and other cost savings for the Commonwealth every year.

Expanded access to high quality pre-k enjoys bi-partisan support in communities throughout the state. Lebanon Mayor Sherry Capello noted that mayors regardless of political affiliation see pre-k as an important part of their communities’ future. “Better education is an important part of any communities’ economic development plan and I believe that better education starts early. I think this is an issue that we all can agree on.” Capello went on to urge state policymakers to work in a bi-partisan fashion to invest in pre-k.

By stimulating economic growth and reducing public safety costs, over time cities and communities are likely to see that expanded pre-k can take some pressure off the local tax base. In the short term, pre-k reduces special education costs so school districts see immediate returns.

Research from Pennsylvania and across the country indicates that where children start school with two years of high quality pre-k under their belts, the districts are seeing the number of children enrolled in special education services drop by as much as 50 percent by 2nd grade.

“In school districts across Pennsylvania, rising special education costs are a leading reason for regular property tax increases,” Dick Hadley, Supervisor, Cranberry Township. “A smart upfront investment in our children can curb that trend in short order. When combined with the savings on the public safety side of the ledger, pre-k makes sense for our kids and our local budgets.”

The mission of the Pennsylvania Municipal League (PML) is to strengthen, empower and advocate for effective local government. PML is a nonprofit, nonpartisan organization established in 1900 as an advocate for Pennsylvania’s 3rd class cities. Today, PML represents Pennsylvania’s cities, townships, town, boroughs, and home rule communities that all share the League’s municipal policy interests. The Board of Directors oversees the administration of a wide array of municipal services including legislative advocacy (on both the state and federal level), publications designed to educate and inform, inquiry and research, education and training certification programs, consulting-based programs, and group insurance trusts. For more information www.pamunicipalleague.org.