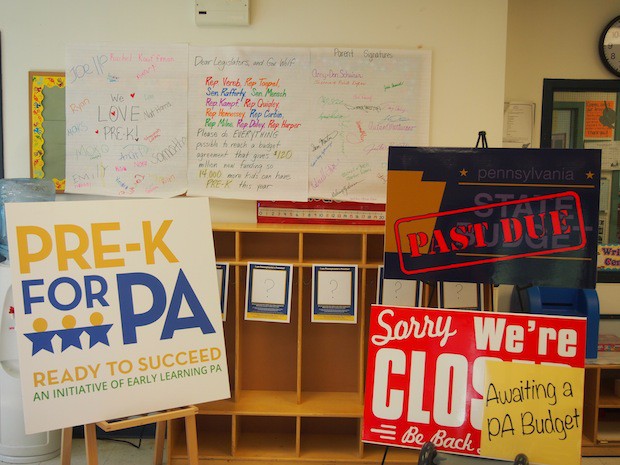 Pre-K providers were joined by superintendents from Pottstown and Spring-Ford school districts at Play and Learn in Royersford, in a newly constructed pre-k expansion classroom, which will remain empty until the level of pre-k funding is resolved with the overall state budget.
Without a state budget in place, Pre-K Counts and Head Start Supplemental grants did not go out to pre-k providers across the Commonwealth, forcing them to make the hard decision to either solicit private bridge financing and pay the interest associated with that or close state funded classrooms.

Media Coverage of this Event:

As the state budget impasse enters its third month, “Pre-K Counts” and “Head Start” supplemental grants are among the funds being held hostage in the budget stalemate.

Erinn Rinn with ‘Today’s Child’ in Delaware County says without state funding to pay for supplies and 14 teachers’ salaries and benefits: “We did have to take out a loan this past month.”

She says that $130,000 loan will only get them to October, but she says they’re lucky to get a loan at all.

“There are a lot of other programs that are much smaller than ours that cannot secure that funding,” says Rinn, “So they’re not going to be opening their classroom doors.” Read the full story here.

Many schools will be unable to immediately provide Pre-K, while other schools will take out a bridge loan in order to have those classes, according to PennLive.com.

Though most believe those loans necessary to adequately prepare students for kindergarten, they aren’t without a substantial amount of uncertainty.

“It’s a risk because they don’t know what the outcome will be and they are nervous it won’t be enough,” Pre-K for PA spokeswoman Kate Philips told Penn Live. “Many are taking loans only through Sept. 30.” Read the full article here.

By Evan Brandt
UPPER PROVIDENCE >> Harrisburg’s inability to adopt a budget on time is having an extreme impact on day care and pre-kindergarten providers and creating uncertainty for their employees and the families they serve as they get ready for the start of school, advocates said Friday.

“We have this beautiful new classroom to educate our children, but without additional state funding, it will sit empty,” said Melanie Godhania, program director for Play and Learn, which hosted a press conference calling on Gov. Tom Wolf and the Legislature to agree on a budget — one which includes Wolf’s proposal for enough funding to add 14,000 more toddlers to Pennsylvania’s pre-K roles.

Play and Learn operates facilities in Collegeville, Lansdale, Green Lane and Norristown, in addition to its Upper Providence location.

“As affluent as Spring-Ford is, we have families who are not being served in this community who are eligible for Pre-K Counts,” Spring-Ford Area School District Superintendent David Goodin said in reference to the state funding stream that helps pay early childhood education costs. Read the full article here. Also printed in the Norristown Times Herald and the Lansdale Reporter

By Candice
UPPER PROVIDENCE >> Almost two months into the state budget impasse, with no end currently in sight, schools and Pre-K classrooms are getting ready to welcome students to the 2015-16 year.

Unfortunately, that welcome comes with a strained smile as the impasse threatens many programs and puts a large toll on school districts across the Commonwealth.

“We typically receive the first of our subsidy payments in August, but that date has come and done,” said West Chester Area School District Superintendent Jim Scanlon. “Because we only receive about 15 percent of our funding from the state, we are still in pretty good shape to start the school year.”

Though the district will have no trouble opening Aug. 31, the impasse does hit it in regards to charter schools.

“There has been an impact to our charter school payments as we were expected to make those payments in August,” Scanlon said. “Without state funding, we withheld those payments, but we received work last week that the state will deduct payments from our tax-relief allocation, which we were supposed to receive this week.” Read the full article here.

Amanda Darr, a 31-year-old working single mom in Langhorne, opened a letter recently that led her to believe her chronic child-care problems for her 4-year-daughter had finally been solved.

She thought that for a few seconds anyway.

“I got the letter of acceptance, and I was screaming on top of the world, ‘I got a break!’ ” Darr said of the communication from the Radcliffe Learning Center in nearby Bristol. “The front page said your child has been accepted. Then reading on, I’m like, ‘No, no, no, no, no, no, no!’ ”

The bad news on Page 2 was that the Bucks County early learning center won’t start taking children in the state-subsidized Pa. Pre-K Counts program until Oct. 16 – about a month and a half later than normal – because the state budget standoff in Harrisburg has forced the center to scramble to find money for the program. Read the full article here.