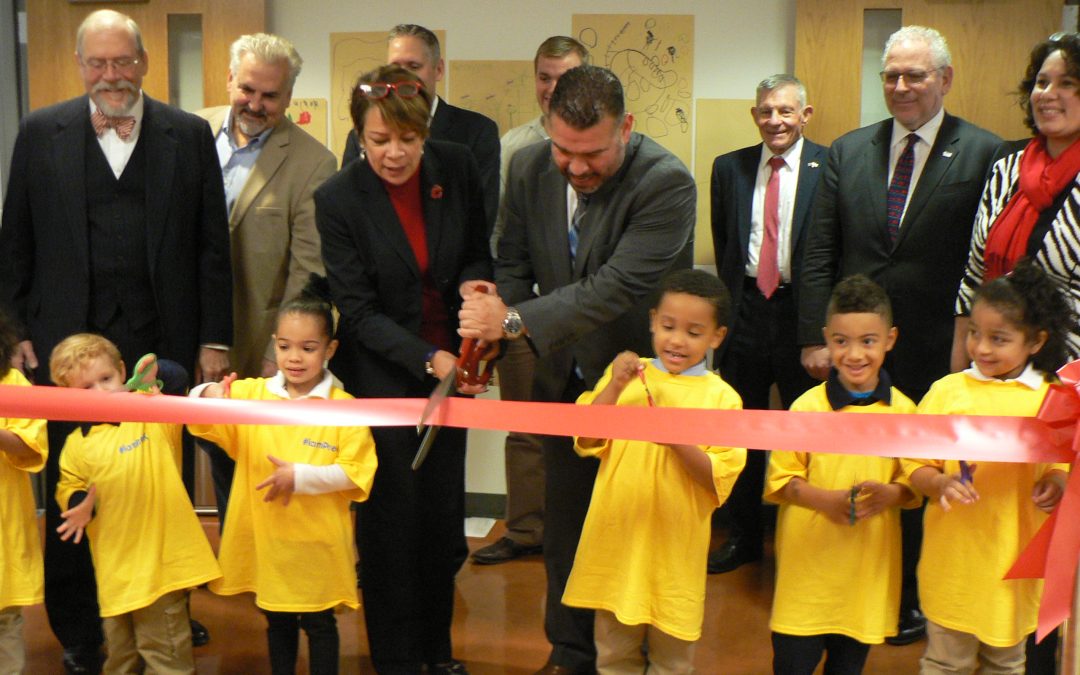 Lancaster, PA – Pennsylvania Secretary of Education, Pedro Rivera joined Lancaster Mayor Rick Gray alongside state, county and local officials for a roundtable discussion on pre-k today. Officials took the opportunity to mark the statewide expansion of a pre-kindergarten with a ribbon cutting ceremony in the new pre-k classrooms at Lafayette Elementary School.

“As we invest in the education of our children, we are investing in our city’s future,” said Lancaster Mayor Rick Gray. “Pre-k programs are backed by decades of research showing that children who attend have a more positive trajectory in life. This means more kids finishing high school, getting a job, less reliance on social services and less crime in our community.”

The expansion of high-quality pre-k was made possible by the infusion of an additional $25 million in funding for Pennsylvania Pre-K Counts and $5 million for the Head Start Supplemental Assistance Program in both the state’s 2015-16 and 2016-17 budgets. Lancaster County early learning providers received new funding for more than 320 expansion seats. Pre-K Counts and the Head Start State Supplemental are the primary state funding sources for high-quality pre-k in Pennsylvania.

“While I join you to celebrate this new classroom, I must be clear that we still have a lot of work to do,” said Patterson. “More than 7,700 income eligible three- and four-year-olds in Lancaster County still lack access to this once-in-a-lifetime learning opportunity.”

More than 120,000 eligible children, or 69 percent of all three- and four-year-olds, across the commonwealth lack access to publicly funded, high-quality pre-k each year.

Robert M. Krasne, Chief Executive Officer of Steinman Communications and member of PA’s Early Learning Investment Commission, noted that Pennsylvania is experiencing a shortage of qualified workers. An effective and comprehensive pre-k program is a way to begin to address that shortage.

“A recent survey from the statewide chamber of business and industry showed that more than half of the 400+ Pennsylvania employers who were surveyed reported trouble finding people with adequate skills, training, or education. This was especially true of technical and skilled job openings,” said Krasne. “The proven benefits of pre-k establish that developing a competent workforce should start at a young age. The lack of access statewide to pre-k is particularly troubling.”

Mr. Krasne referenced a large body of research that shows children who benefit from high-quality pre-k:

“A review of Pennsylvania’s state inmate population reveals that more than 50 percent of inmates have not graduated from high school,” Stedman commented. “This revealing statistic is more reason for the imperative that law enforcement leaders place on educational success, which is best achieved by children getting a strong early educational foundation.”

Retired Army Lieutenant General Dennis Benchoff of Lancaster informed the group that the military is also concerned about a future qualified workforce and its potential impact on national security.

“Unfortunately, we know we have our work cut out for us,” said Lt. Gen. Benchoff. “According to the Department of Defense, 72 percent of Pennsylvania’s 17-24 year-olds are not eligible for military service due to inadequate education, a criminal record, or obesity or other health condition. In this way, an unqualified workforce has real national and economic security concerns for the future. It’s my hope that Pennsylvania continues to prioritize early learning.”

Pre-K for PA is an issue campaign supported by thousands of individuals and organizations across Pennsylvania who believe that investing in our children is a necessary and urgent priority. Fight Crime: Invest in Kids is one of 10 founding partners. For more information, visit prekforpa.org.