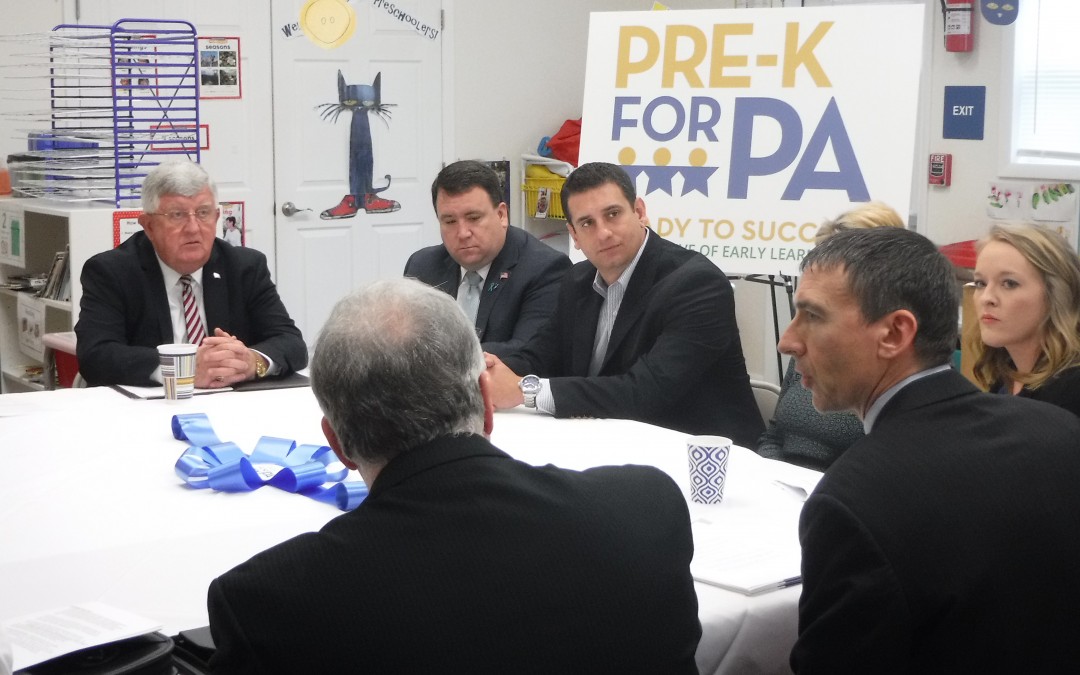 BLAIRSVILLE — Great Expectations Child Care and Early Learning Center in Blairsville is one of the latest education centers to expand its number of subsidized pre-kindergarten slots.

On March 1, Great Expectations learned it would gain another 17 Pre-K Counts-funded slots, on top of the existing 17, according to Madeline Savage, director.

Several local elected officials and law enforcement gathered Friday to celebrate the expansion and talk about the benefits of early childhood education, especially for at-risk children from low-income families.

Savage told them that about 60 to 70 percent of the children do receive subsidies and qualify for the reduced meal program, which shows that many come from low-income families, she said. The grant expansion has allowed more of the 110 children at the center to receive subsidized pre-K and add some new children or those whose parents may have pulled them out for financial reasons.

Great Expectations expanded a year and a half ago and has been in Blairsville since 2009.

Advocates say that students who attend pre-K need fewer special needs through school and aren’t as likely to be held back, are healthier and aren’t years behind their peers when kindergarten starts.

Sarah Byrnes-House, representing the Pittsburgh Association for the Education of Young Children, said 58 percent of children below the poverty line in Indiana County don’t have access to high-quality pre-K. The percentage is the same in Allegheny County. In Washington County it’s 69 percent and it’s 71 percent in Westmoreland County. She said the U.S. lags behind other countries and ranks 24th out of 29 in spending for early learning.

The latest state budget called for $25 million more funding to Pre-K Counts and $5 million more for the Head Start Supplemental Assistance Program. Early childhood education centers and school districts across the state had been waiting for months on word about their Pre-K Counts applications due to the budget stalemate in Harrisburg.

State Rep. Dave Reed said the discussion among lawmakers has changed a lot in the past decade.

“Folks in Harrisburg are much more open to investing in early childhood learning programs,” he said “There are still a few folks out there that look at it as a glorified day care program and I don’t think they quite understand it. And it’s a generational issue, absolutely.”

“You’ve got kids showing up to kindergarten ready to read, doing addition, subtraction, looking at multiplication and competing against kids who don’t know the difference between a circle and a square. That child is already left behind.”

Reed said pre-kindergarten could also help cut down on expenses for remediation later in a student’s career.
“This truly is the opportunity to balance the scale for those children who are living in atmospheres that are not ideal. They didn’t choose to be born into those atmospheres. They are products of a situation that is beyond their control.”

Bruce Clash from Fight Crime: Invest in Kids has been helping to organize support for pre-kindergarten across the state from a law enforcement standpoint. The organization’s contention is that at-risk children who don’t attend a pre-kindergarten program can be more likely to be arrested for violent crimes and end up in prison later in life.

Half of inmates in Pennsylvania don’t have a high school diploma, said Dougherty. He said that education is cheaper than incarceration and that it was a no-brainer to invest in the front end to keep people out of the corrections system.

Fyock said in his years in law enforcement he’s seen generations of families follow the same patterns of crime. He said it was important to reach children when they’re young and be proactive.

Mission: Readiness is an organization comprised of former service members who hope to prepare children for success in order to qualify for military service, or keep from being disqualified. Steve Doster, Pennsylvania director, said about 72 percent of 17- to 24-year-olds are not eligible for service. It can be due to inadequate education, lack of skills to pass the entrance exams or lack of physicality. Drug offenses also preclude people from serving.

Rod Ruddock, a retired U.S. Army Reserve major general and current county commissioner, said that young adults who are fit for military service are also more likely to be employable in the general workforce.