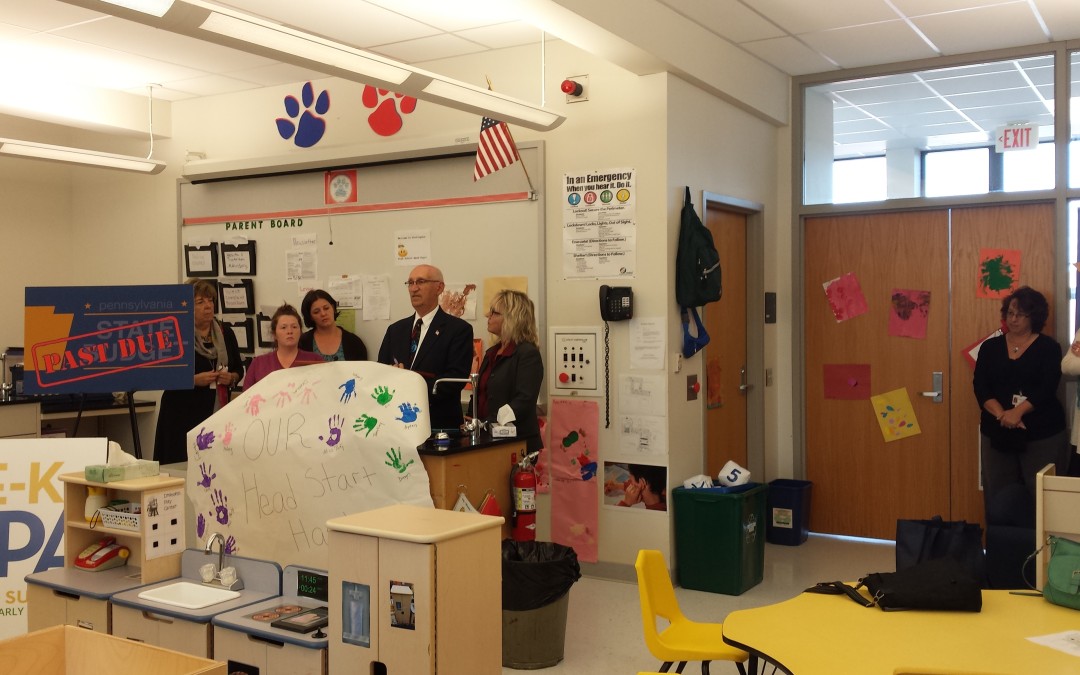 HUNTINGDON COUNTY (October 15, 2015)– As the budget impasse continues in Harrisburg, the Huntingdon County Child and Adult Development Corporation, which currently enrolls 120 pre-k kids in seven classrooms across the county, says it ability to keep the doors open depends on the approval of yet another bridge loan. If approved, the loan will keep HCCADC’s 7 state funded Pre-K Counts and Head Start classrooms open until roughly Thanksgiving.

“It is extremely difficult to operate ‘state-funded’ early learning classrooms with no state funding,” said Louise Ketner, Executive Director of Huntingdon County Child and Adult Development Corporation. “Due to the impasse, we have already had to close our adult education and family literacy programs. Now we are trying to secure our third loan to keep our pre-k kids enrolled and our 17 teachers employed.”

As the budget impasse stretches on to its 106th day, Pre-K Counts and Head Start Supplemental grants have not gone out to pre-k providers across the Commonwealth – forcing them to operate off of reserves, lines of credit, bridge loans, or ultimately consider closures and layoffs.

“We had actually hoped to open an additional classroom this school year to help off-set the high demand for pre-k in Huntingdon County,” continued Ketner. “This all speaks to the fact that our state legislators and Governor Wolf must get to work and pass a budget that keeps pre-k kids in class and takes a step towards reducing the unmet need for these services in our community.”

Stephanie Mock of the Pre-K for PA Campaign stressed the importance of pre-k. “High-quality pre-k is a critical investment in the future of our children. Higher graduation rates, lower criminal activity, greater lifetime earnings, lower rates of special education are all connected by research to quality pre-k programs,” said Mock.

“As a parent, you see the important progress that your child makes in that year of Head Start,” said Danica Coulter, a parent of an enrolled student. “I would really hate to have my child miss out on a full year of pre-k because of this state budget impasse.”

The Pre-K for PA Campaign continues to encourage Governor Wolf and legislative leaders to return to the negotiating table and pass a budget with a significant investment in pre-k that gets us on the path to serving more of the 200,000 thee and four-year olds without access in the Commonwealth.

According to data from the campaign, each year (under FY 2014-15 funding levels) more than 70% of three- and four-year-olds in Huntingdon County do not have access to high quality pre-k.

“These 200,000 kids don’t get a “do-over” if they miss out on high-quality pre- k,” continued Mock. “For them, this budget negotiation must include $120 million of new state funding so that programs like this one can expand to serve more of the kids without access right here in Huntingdon County.”

The Pre-K for PA campaign believes that high-quality pre-k should be available to all children – beginning with those most in need. Advocates say that to accomplish this Pennsylvania needs to aggressively ramp up its investments over the next four years.

“This will take about $400 million in additional state investments over the coming years,” said Mock. “The greater the funding increase for Pre-K in this budget – the closer we get to that goal.”