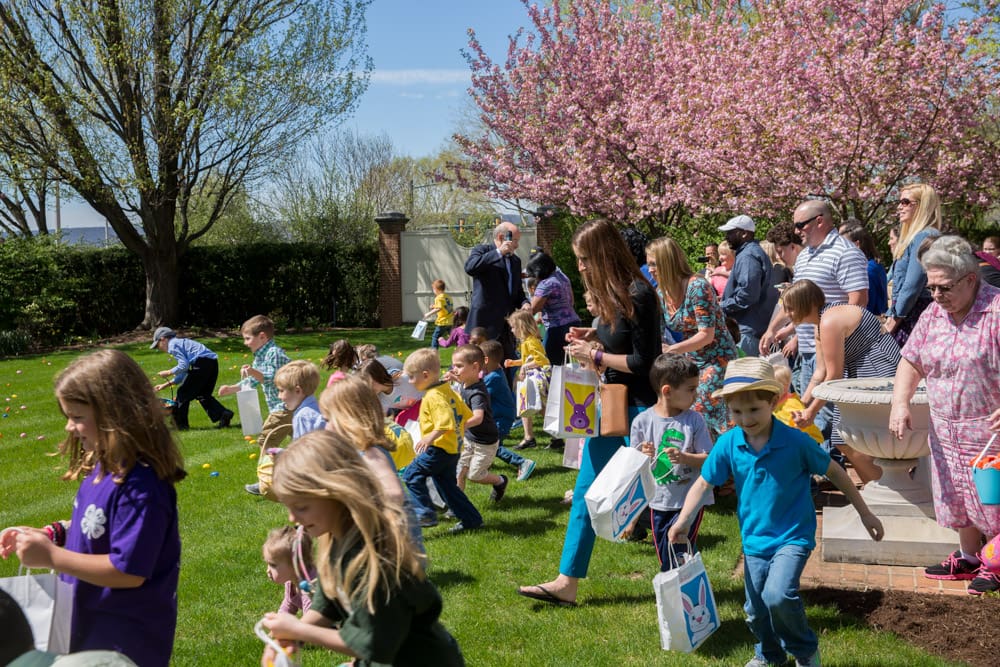 Harrisburg, PA – Governor Tom Wolf and First Lady Frances Wolf were joined today by preschoolers from Harrisburg-area pre-kindergarten centers and members of the Pre-K for PA campaign for an Easter Egg Hunt at the Governor’s Residence in Harrisburg. During the event, the Governor reiterated his commitment to investing in high-quality early childhood education.

“Frances and I are excited to host Harrisburg-area preschoolers at the Governor’s Residence today,” said Governor Wolf. “These children – and thousands of others like them from across Pennsylvania – are counting on us in Harrisburg to ensure that high-quality pre-kindergarten programs are available to them in their communities. That is why I called for a state budget that includes an increase of $75 million for pre-k, which will allow for more than 8,400 additional children to enroll in Pennsylvania Pre-K Counts and the Head Start Supplemental Assistance Program. The stronger the investment in high-quality early learning the greater the return – for our children and our commonwealth.”

Studies show that children who participate in high-quality pre-kindergarten perform better in school, graduate at higher rates and earn more throughout their working lives compared to peers that do not have access to early learning programs. Additionally, children who were previously enrolled in Pre-K Counts outperform their economically disadvantaged peers in third-grade math and reading.

The Pre-K for PA campaign lauded Governor Wolf for his commitment to expanding access to high quality pre-k to more Pennsylvania three- and four-year-olds: “Research continues to show that pre-k can make a difference – it can reduce grade repetition, special education placements, dropout rates, and ultimately save the commonwealth money,” said Jodi Askins, Executive Director of PennAEYC and principal partner of Pre-K for PA.  “Governor Wolf’s steadfast commitment to investing in an early education system that provides access to 8,400 more Pennsylvania children this year is further evidence that he gets the value of pre-k and has Pennsylvania’s future as a top priority.”

Fair and increased education funding for all Pennsylvania schools continues to be one of Governor Wolf’s top priorities to ensure students are college and career ready.

The future of Pennsylvania depends on making investments in what matters most. In this year’s budget, Governor Wolf is proposing an additional $209 million increase in education funding. Our commonwealth is facing a serious budget deficit, but by reducing government bureaucracy and finding cost-savings, we can continue to invest in our children’s futures so we can make Pennsylvania stronger.

The 2017-18 budget investments in education include:

*   $100 million increase in Basic Education Funding. Following $415 million in basic education and Ready to Learn Block Grant funding increases over the past two fiscal years, this increase will be distributed through the Basic Education Funding Formula, providing an equitable and predictable allocation to school districts across the commonwealth.
*   $25 million increase in Special Education Funding. This increase, allocated to school districts through the formula adopted by the bipartisan legislative Special Education Funding Commission, builds upon a $50 million increase over the last two years.
*   $75 million increase in high-quality early childhood education. Children who participate in high-quality pre-k programs perform better in school, graduate at higher rates and earn more throughout their lives compared to peers without access to early learning programs. Building upon $60 million in additional investment over the past two years, this nearly 40 percent increase in funding will allow more than 8,400 additional children to enroll in Pennsylvania Pre-K Counts and the Head Start Supplemental Assistance Program.
*   $8.9 million increase for the 14 universities of the Pennsylvania State System of Higher Education. The governor will continue to work with PASSHE to develop individual college plans that address performance, affordability, and accountability, while partnering with employers to create structured career pathways.