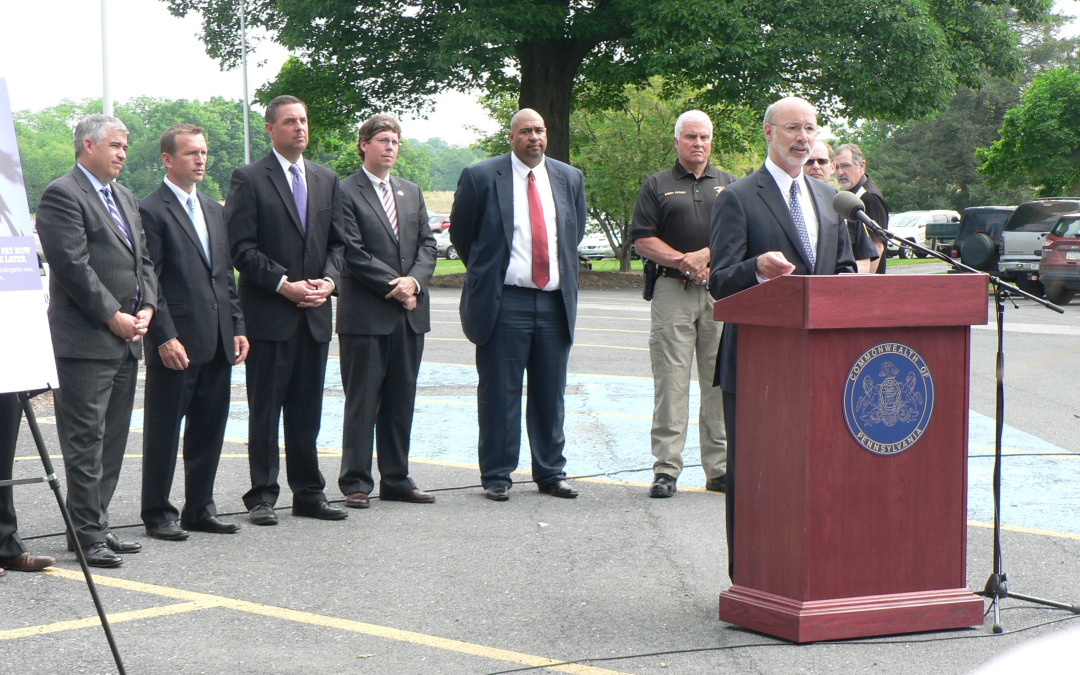 Camp Hill, PA (May 26, 2015) – South central Pennsylvania prosecutors and other law enforcement leaders who are members of Fight Crime: Invest in Kids were hosted by PA Corrections Secretary John E. Wetzel at State Corrections Institution (SCI) Camp Hill today to release a report – We’re The Guys You Pay Later – that shows how Governor Tom Wolf’s proposed $120 million state funding increase for early childhood education can boost high school graduation rates, reduce the number of people who are incarcerated in Pennsylvania, and eventually lead to $350 million in Corrections and other cost savings for the Commonwealth every year.

The law enforcement leaders urged state lawmakers to prioritize expanded funding for high-quality pre-kindergarten to reduce the unmet need in south central Pennsylvania and across the Commonwealth. Currently, more than 200,000 out of 296,000 3- and 4-year-olds in Pennsylvania lack access to high quality pre-k every year.

Watch video of Gov. Wolf speaking at the event.

Pittsburgh Post-Gazette: “Governor ties early childhood education to crime prevention”
“Mr. Wolf, along with state Corrections Secretary John Wetzel and others, noted a report released from the organization ‘Fight Crime: Invest in Kids’ that says more pre-kindergarten programs would boost high school graduation rates and reduce the number of people in prison… According to the report, the $120 million spending increase for early childhood education included in Mr. Wolf’s budget proposal would eventually save the state $350 million in prison spending each year.” Read the full article.

Allentown Morning Call: “PA Gov. Tom Wolf goes to prison to tout preschool funding”
“The Fight Crime: Invest in Kids report also used parameters established by the Washington Legislature’s research unit to conclude that Wolf’s preschool budget would save taxpayers an average of $26,000 for each newly served child. Those savings would be had by reduced spending in special education, grade retention during the child’s school-age years and by keeping the children off welfare and prison rolls as they move into adulthood. The savings would add up to $364 million if all the newly served children lived to be 65, the report found. ‘This is not soft on crime, this is smart on crime,’ said Snyder County District Attorney Michael Piecuch, a Republican… ‘I can’t think of a better investment and a better reason for us to be joined here by district attorneys, by law enforcement and by the governor himself right outside one of our prisons to really highlight the connections that we have to have the courage to invest today to pay off tomorrow,’ said [Acting Secretary of the Department of Corrections John] Wetzel.” Read the full article.

Newsworks: “GOP prosecutors bolster Wolf’s case for more Pa. pre-K funding”
“Several district attorneys in Pennsylvania are standing behind Gov. Tom Wolf’s proposal to invest more money in early childhood education. Four Republican district attorneys and the Democratic governor appeared Tuesday at Camp Hill prison to urge lawmakers to allocate more funding in pre-K programs. The investment, they said, would boost high school graduation rates and reduce the number of people in prison. All of that would save money.” Read the full article.

Chambersburg Public Opinion: “Law enforcement: Pay for pre-K now, or pay us more later”
“Pennsylvania Corrections Secretary John Wetzel on Tuesday hosted an event urging state lawmakers to expand funding for high-quality pre-kindergarten in expectations of curtailing future crime and costs…. ‘I feel we need to do all we can to give kids the best chance to do well in school,’ [Chambersburg Police Chief David] Arnold said, ‘Education is the great equalizer. If a kid does poorly in school and does not get at least a high school education his future is severely limited and crime becomes a viable option. It’s much cheaper to assist the kids and their families (so they) see the value of education and provide hope and a path to a brighter future’… Gov. Tom Wolf, one of the speakers on Tuesday, has proposed spending $120 million more on preschool for three- and four-year olds.” Read the full article.

Carlisle Sentinel: “Wolf, lawmakers release report for funding of quality early education”
“Pennsylvania Gov. Tom Wolf, prosecutors and other law enforcement leaders joined together with Fight Crime: Invest in Kids at the State Corrections Institution at Camp Hill to release a report stating that investment in early childhood education will save on incarceration costs down the road… Cumberland County District Attorney David Freed said as a great believer of education, he believes these programs work… Freed said there are nearly 49,000 prisoners in the state prison system, which costs taxpayers $2 billion a year, with 0.004 percent of the population consuming about 7 percent of the state budget. These ‘troubling statistics’ can start to be turned around by investing in at risk children at a young age. ‘Increasing access to pre-k will lead more kids succeeding in school and save taxpayer dollars for years to come,’ Freed said… Lebanon County District Attorney David J. Arnold, and Snyder County District Attorney Michael Piecuch echoed these comments, stating that investing in the front-end will save taxpayer dollars in the back-end.” Read the full article.

AP: “Law enforcement adds backing to Wolf’s pre-kindergarten plan”
“Gov. Tom Wolf is getting help from law enforcement officials in his push to persuade lawmakers to spend more money to raise the quality of Pennsylvania’s pre-kindergarten programs… A 2001 study by the Institute for Research on Poverty at the University of Wisconsin showed that school participation that starts at ages 3 or 4 was associated with ‘significantly higher rates of school completion by age 20, with lower rates of juvenile arrests’… Under Wolf’s plan, 14,000 more 3- and 4-year-olds would have access to high-quality pre-kindergarten programs, which must meet guidelines for curriculum, teacher training, nutrition and class size, among other things. Currently, 56,000 Pennsylvania children attend high-quality public pre-kindergarten programs. That is 19 percent of nearly 300,000 3- and 4-year-olds in the state… New York, New Jersey, Maryland and West Virginia are well ahead of Pennsylvania, according to the coalition’s figures.” Read the full article.

Philadelphia Inquirer: “Wolf: Let’s pay for preschool, not prison”
“Wolf, surrounded by area district attorneys and other law enforcement officials outside the State Correctional Institution at Camp Hill…cited studies that show children who participate in high-quality preschool programs are less likely to be arrested for a felony or incarcerated as young adults. Among them was a report by the national anticrime group Fight Crime: Invest in Kids. It stated that Wolf’s proposed boost for early-childhood education could save the state more than $350 million over the lifetime of those children who would now be able to enroll in prekindergarten programs… The state currently spends just over $2.2 billion on corrections and probation and parole – about 8 percent of the overall budget.” Read the full article.