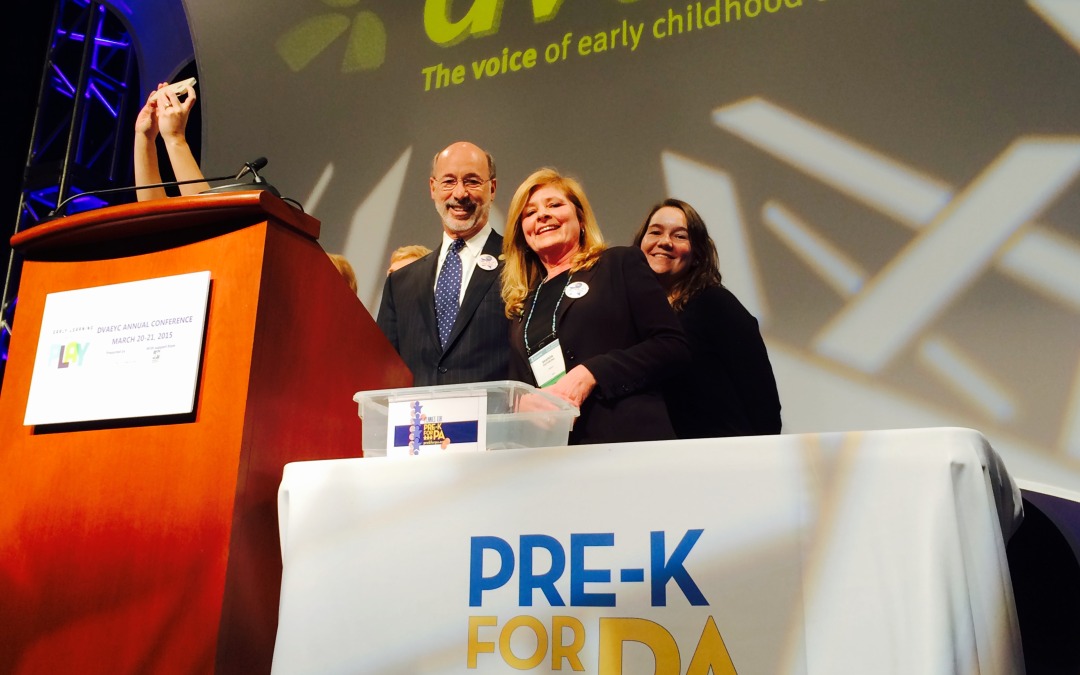 PHILADELPHIA (March 20, 2015)– Gov. Tom Wolf was presented with “Pennies for Pre-K” today at the Delaware Valley Association for the Education of Young Children (DVAEYC) annual conference. The Governor spoke to the group of more than 1,500 early educators about the importance of a high-quality preschool education and outlined his plan for expanded access in Pennsylvania.

“Early education programs provide the foundation children need to enter school ready to learn. My plan increases enrollment in early childhood education by 75 percent,” said Gov. Tom Wolf. “I’m honored to be among the many educators, administrators and parents here at the Delaware Valley Association for the Education of Young Children that share my commitment to make the necessary investments in our children’s futures.”

DVAEYC is a founding partner of Pre-K for PA, a non-partisan statewide issue campaign formed to ensure that every 3- and 4-year-old in the commonwealth will have access to high-quality pre-kindergarten by 2018.

DVAEYC Executive Director, Sharon Easterling, kicked-off a statewide Pre-K for PA “Pennies for Pre-K” initiative that highlights the importance of providing adequate funding for early childhood education and showcases support for the $120 million increase in preschool funding outlined by Gov. Wolf in his 2015-16 state budget proposal. Easterling called on the more than 1,500 early educators to engage their neighbors and urge their legislators to support early learning.

“Access to early learning is key to a child’s early development and their success throughout school and future earnings,” said Sharon Easterling. “The investment proposed by Governor Wolf goes a long way toward our goal of providing the opportunity to learn to all 3- and 4-year-olds. Now, early educators, community leaders, neighbors and families must rally together and send a message to leaders in Harrisburg that we need more ‘Pennies for Pre-K!’”

The annual DVAEYC Conference is the premiere event for the early education community in the Delaware Valley. The DVAEYC 2015 “Early Learning: What’s Play Got to Do with It?” brings together more than 1,500 early educators, nationally recognized presenters, innovative exhibitors, and public officials for two days of exciting idea-sharing and discussion of one of the most crucial elements of early childhood — the importance of PLAY.

Conference attendees and educators across the state are being encouraged to collect pennies for pre-k and talk to parents and community members about the educational, emotional and developmental value of early learning. Children will decorate collection containers, gather pennies, and participate in counting activities. All the pennies collected will be delivered to state officials in Harrisburg this spring.

Despite the proven benefits of high-quality early learning, too few Pennsylvania children have access to these programs. Only about 1 in 6 of PA’s 3- and 4-year olds is enrolled in publicly funded, high-quality pre-k, a statistic that has remained unchanged in recent years due to the sluggish state investments.