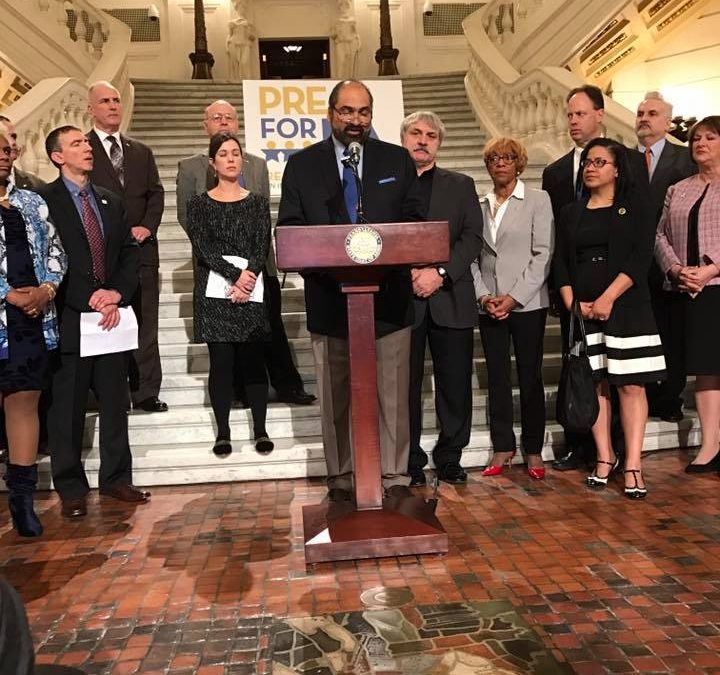 Harrisburg, PA, January 25 ⎯ It is time to level the playing field and scale up access to high-quality pre-kindergarten programs that prepare kids for academic and lifetime success, top Pennsylvania athletes said at a Capitol news conference today.

The report brings to light new data from the Organization for Economic Cooperation and Development (OECD) showing that American children are far back in the pack when it comes to the international “medal count” on academic achievement.  America’s 15-year-old children finished 25th in science and 40th in math out of the 72 countries taking the (OECD) PISA exam in 2015.  This is in stark contrast to the USA’s dominating performance at the 2016 Rio Olympics winning 121 medals compared to second-place China’s 70 medals.

Recalling the great amounts of support he received along the way to becoming an NFL Hall of Famer, Franco Harris noted that far too many kids lack adequate support for becoming competitive students. Harris pointed to research showing 60 percent of the “achievement gap” in reading and 70 percent of the achievement gap in math between low-income and higher-income children in high school is already present at the start of kindergarten.

“Access to prekindergarten creates an opportunity to level the playing field for all children to achieve their full potential regardless of the income level of the families they inherited,” Harris said.

The report documents studies across the nation showing high-quality pre-k helps children develop in all areas⎯social, emotional and behavioral skills⎯along with essential pre-math and pre-reading skills. Additionally, the analysis team at the Organization for Economic Cooperation and Development identified high-quality pre-k as one of the common characteristics among the world’s “smartest countries.”

Pennsylvania has made strides in expanding access to high-quality pre-k, but more needs to be done, the athletes stressed. They noted that 112,900 three- and four-year-olds qualify for high-quality, publicly funded pre-k that remain unserved due to lack of funding⎯that’s enough to fill Penn State’s Beaver Stadium and leave another 7,000 children in the parking lot.

Former Olympian freestyle heavyweight wrestler Bruce Baumgartner, one of just eight athletes in U.S. history to medal in four different Olympiads (two gold, one silver and one bronze), emphasized his desire to see all children achieve their full potential on and off the field and become champions in life. “Athletes know that every medal we earn represents a team effort,” he said. “Our youngest children deserve the same team effort guiding them toward success on and off the field. Unfortunately, far too many kids don’t have access to quality pre-k, which hampers their chances for success before they even reach the starting line of life.”

Bruce Clash, on behalf of the Pre-K for PA Campaign, explained that all Pennsylvanians bear the brunt of children being left behind academically. “When a child starts school already behind, the cost to educate that child already begins to escalate,” said Clash. “Kids that continue to fall behind in school have a greater risk of dropping out and engaging in criminal activity. This is why the research on pre-k shows that it can return over $29,000 on average, net benefits to society for every child served.”

The athletes join a growing chorus of voices across Pennsylvania that are part of the Pre-K for PA Campaign in calling on Pennsylvania lawmakers and Governor Wolf to expand access to publicly funded high-quality pre-k for all eligible children and begin to address affordability issues among the middle class. Specifically, the Campaign is calling for an $85 million increase to state pre-k funding in the 2017-18 state budget to serve 10,000 additional children.

Also participating in the event were State Senator Pat Browne and Representative Mark Longietti, who are Co-Chairs of the bicameral, bipartisan Early Childhood Education Caucus; and Suzann Morris, the Deputy Secretary of the Office of Child Development and Early Learning within the PA Departments of Education and Human Services.