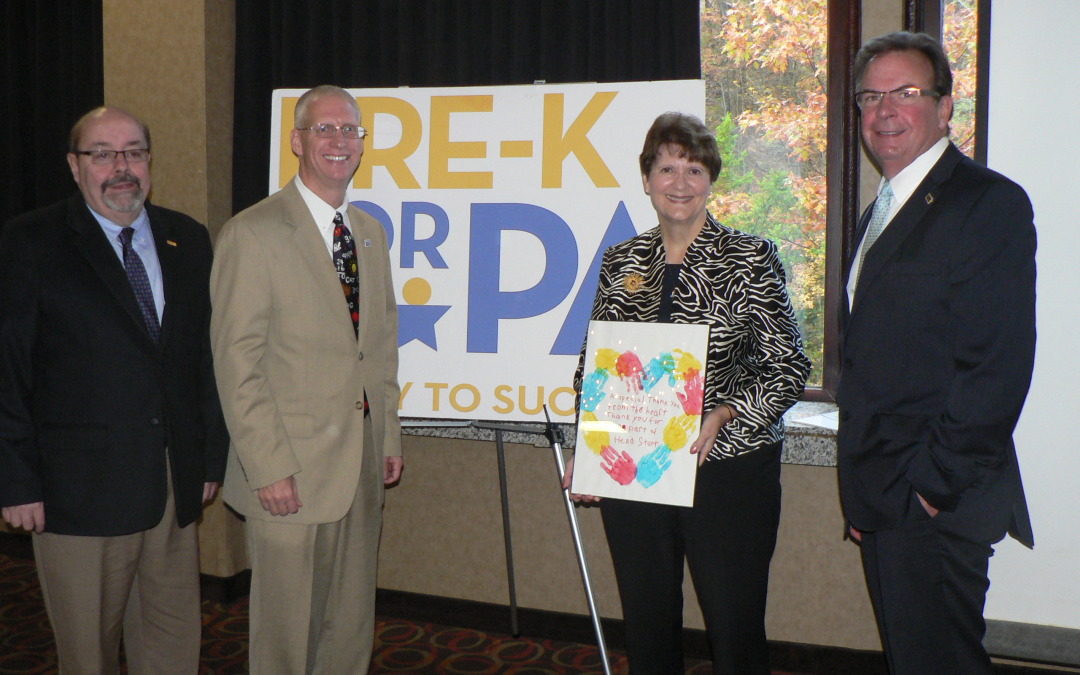 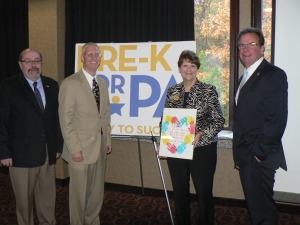 Mundy was honored at a reception this morning hosted by the Pre-K for PA campaign and some of its local supporting partners, including the United Way of Wyoming Valley and the United Way of Lackawanna and Wayne counties.

The Luzerne County lawmaker has been a tireless advocate for early learning investments during her 24-year tenure in the state House of Representatives. Mundy helped start the Pennsylvania General Assembly’s Early Childhood Education Caucus, a bipartisan group of 129 House and Senate members, and serves as co-chair of the caucus.

“Her positive impact in early childhood education cannot be understated and truly will be felt for generations to come,” said Steve Doster, the Pennsylvania state director for Mission: Readiness, an organization of retired military leaders that is one of the founding partners of the Pre-K for PA campaign.

“Pennsylvania’s early learning community has been very fortunate to have Phyllis Mundy in its corner year after year as we worked to increase state investments in high-quality pre-k and other proven programs that prepare children for success,” Doster said.

Along with advocating for increased state investments in pre-k and other early learning programs, Munday has been a leader in calling for high-quality standards in early learning.

Despite the dedicated efforts of Mundy and her legislative colleagues over the years, today only 1 in 6 of Pennsylvania’s 3- and 4-year-olds has access to publicly funded, high-quality pre-k. Increasing Pennsylvania’s investment in high-quality pre-k can increase its proven benefits, including decreased dropout rates, increased graduation rates and college enrollment, and higher lifetime earning potential.

Recent polls show the majority of Pennsylvania voters support increased investments in pre-k, in part because they recognize its long-term benefits to students, schools and communities.

Pre-K for PA is an issue campaign supported by thousands of individuals and organizations across Pennsylvania who believe that investing in our children is the right choice and an urgent necessity. Our vision is that every 3- and 4-year-old in Pennsylvania will have access to high-quality pre-k. While the campaign neither endorses nor opposes candidates, it advocates on behalf of this vision for Pennsylvania’s children, schools and communities. 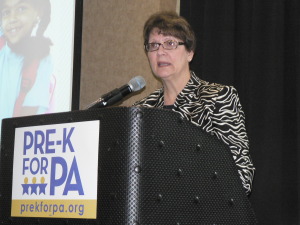 Phylis Mundy speaking at the event.