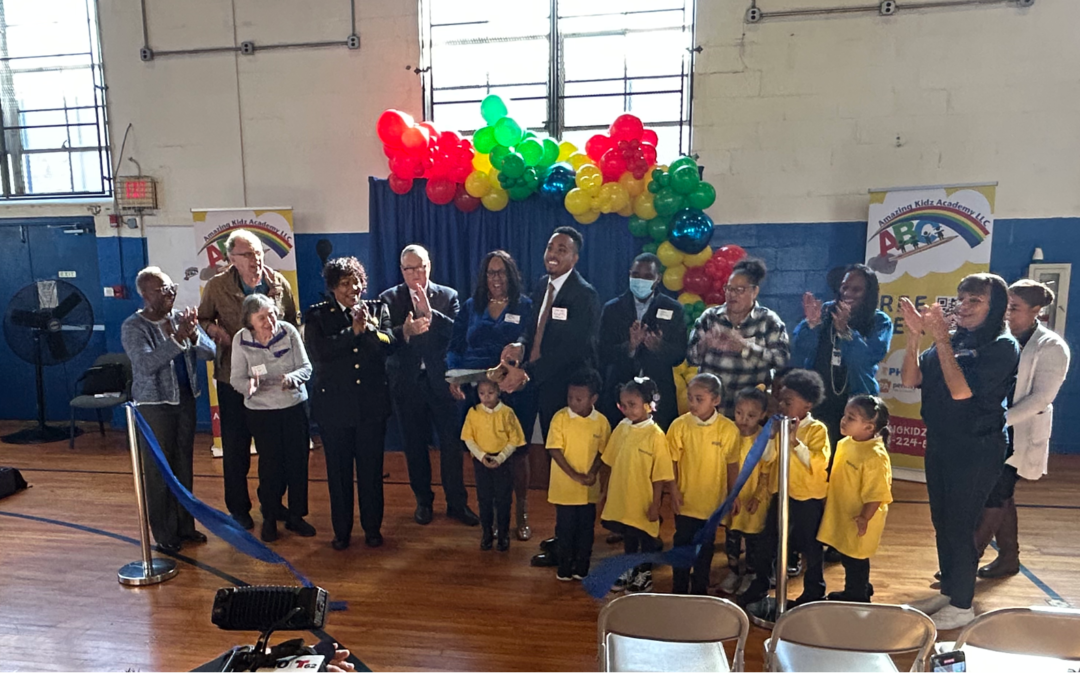 “It’s an amazing day to have so many distinguished guests visit our Oxford Circle site today to mark the passage of the 2022-23 state budget that includes a $79 million increase for more of Pennsylvania’s three- and four-year-olds to attend Pre-K Counts and Head Start, and to celebrate our purchasing of the school building and other parcels at the site where we opened our first child care space,” said Lisa Smith, President of Amazing Kidz Academy LLC.  “This $79 million increase is important because we know that 43 percent of income eligible 3- and 4-year-olds in Philadelphia do not yet have access to publicly funded high-quality pre-k. This equates to more than 12,000 income eligible three- and four-year-olds still lacking access to these services every year in our City.

“Across Pennsylvania more, than 100,000 eligible three- and four-year-olds are waiting. Additional funding enables us to attract, recruit, and retain highly qualified staff, offering a real living wage, health and pension benefits, that we would could not afford, without the increased PreK budgetary spending.”

The Pre-K Counts expansion classrooms at Amazing Kidz Academy LLC were made possible by the infusion of an additional $60 million in funding for the Pennsylvania Pre-K Counts Program and $19 million for the Head Start Supplemental Assistance Program as part of the state’s 2022-2023 state budget. Together, this new funding will allow roughly 2,300 additional students access to high-quality pre-k. Pre-K Counts and the Head Start State Supplemental are the primary state funding sources for high-quality pre-k in Pennsylvania.

Carol Austin, Executive Director of First Up and a principal partner in the Pre-K for PA Campaign, noted that access to high-quality pre-k is an important part of a child’s opportunity to lead a prosperous life. Austin cited a recent study by the University of North Carolina Chapel Hill showing that kids enrolled in Pre-K Counts outperformed kindergarten peers who did not have access to pre-k. This advantage equated to four to five months of learning gains, which is a substantial difference in development at that age.

“These outcomes are significant because language and math skills have been shown to be the school readiness skills that most strongly predict later academic achievement,” said Austin.

Austin also referenced recent polling data showing that 90 percent of registered voters in Pennsylvania agreed that early care and education are important investments that help set kids on a path to leading healthy and productive lives.

Philadelphia Sheriff Rochelle Bilal added that high quality pre-k programs are not only an important part of our educational system, but also as a critical part of our overall community safety efforts. “Studies show that high quality pre-k programs also reduce problematic social and self control behaviors that hinder student learning and can lead to future delinquency and even crime,” said Bilal.

Participants thanked state lawmakers for their support at the state level that has led to more state funding for Pre-K Counts and Head Start year after year.

ABOUT PRE-K FOR PA

Pre-K for PA is an issue campaign supported by thousands of individuals and organizations across Pennsylvania who believe that investing in our children is a necessary and urgent priority. For more information, visit prekforpa.org.